Okay real life first.  I attended a very lovely wedding today of some close friends of ours.  It was unique in that, 1, they did it at a neighborhood bar/cafe, and 2, they did it on a Sunday.  It was a lovely time, and it’s wonderful to get some ideas for our upcoming nuptials. 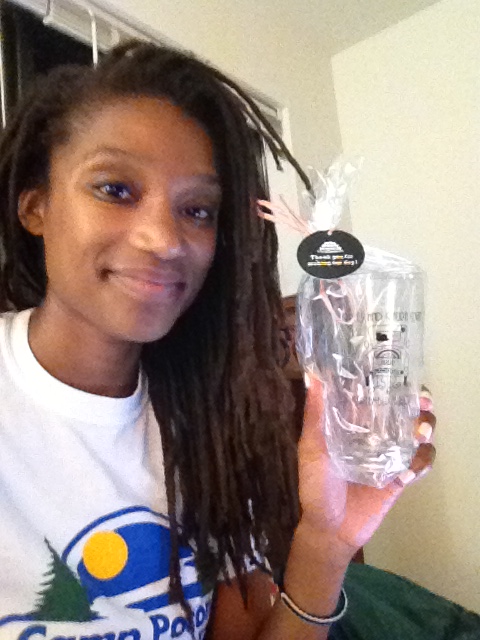 The favors were super cute, personalized pint glasses, and the company was divine. Congrats to the happy couple!

The issue with cyclists/runners came up last week when a good friend asked a legitimate questions about whether cyclists had to abide by the same rules that cars did.  (Absolutely yes).  Another friend, (this took place on Facebook,) sort of jokingly commented that all cyclists were idiots and that they should get off the road.

All jokes aside, this sentiment is not a rare one.  The following was a huge deal in Raleigh, after a local morning DJ made some nasty comments about local cyclists.

“On September 22 and 23 of 2003, Dumas encouraged listeners to call in and relate stories about how they terrorized bicyclists. In the course of that show, he said that he kept empty bottles in his vehicle so that he could throw them at cyclists. [2] These statements caused protests from the local community,[3] who successfully lobbied for an official resolution that the capital of the state was friendly to bicyclists[4] and convinced some local businesses to pull their advertising. Bob was suspended for two days and station management aired an apology.[5] Eventually a compromise was reached between the community and station management.[6]”

And folks wonder why I literally hate morning radio with such a passion.

The point is, cyclists and runners alike aren’t looked upon favorably by non-runners and cyclists.  I get it, there are some folks who act like a-holes when they get on bikes and go for a run.  Don’t follow the rules.  But the majority of us follow the rules, and generally just don’t want to be killed by a driver who’s texting their friends on the way to work.

About a year ago, I was coming home from a party around 1 am, and I happened upon a cyclist who’d been hit by a car.  The car had clearly left the scene, and he lay in shock while a few of us tried to figure out what to do.  He was doing what he was supposed to.  He was wearing a helmet, had a blinky on his bike, and was riding in a well-lit, well-populated area.  As it turns out, the driver was driving without a license, and was impaired when she hit him and left the scene.  Poor guy was in shock, and I believe he survived, but broke his leg and got 70+ stitches out of the deal.

All this said, most of us cyclists, walkers, and runners are doing what we can.  We wear our bright clothing, follow the rules of the road, turn down our iPods, and pay attention,  And at least once a run, I’m forced to give folks the “what the hell!” hands because they’re flying out of a right turn so quickly that had not jumped out of the way, I’d be a goner.  The few of us that act like a bunch of wieners don’t represent us as a whole.

3 thoughts on “OMG I JUST HATE RUNNERS/CYCLISTS WHY WON’T THEY JUST GO AWAY!”