I texted Chelsie (the woman who not only convinced me to take a pregnancy test back in December cause she knows what’s up, but who has been an absolute guru throughout this process), and I asked her if she knew of a way to make something more loafy, and less cakey.  She gave me an answer before she was like, “wait…what are you doing…” and I confessed that I really wanted to eat Funfetti.  She encouraged me to just make funfetti, but we did find a recipe for fufetti banana bread, which is either going to be really disgusting or awesome.  I will let you know.

I spent last weekend (kinda a gross weekend, weather-wise) in DC.  I’m still working on convincing Austin that we need to move there.  Lately, I’ve been thinking that it may be a cool place to raise an interracial child.  Not that Raleigh is a bad place, Raleigh is actually pretty progressive, but I think a big move one of these years may be in the cards for us.

On Friday, I drove up and went straight to the Rent the Runway storefront, which they have in DC, and New York City.  I had to pick something up for a gala I was attending since all of my stuff fits pretty snug.  The girl was very sweet – I told her that I just needed something in my size.  She brought out a few choices and I think I went with something I found already in the dressing room from the shopper before.

After that, I drove to my friend Jeff’s, and we Uber-ed over to the gala.  I met Katie Couric, and I really wanted to stick around and chat with her longer, but suffice it to say that she was a lovely, lovely woman with a really sharp sense of humor.  I hope our paths cross again, because she was just that fantastic.  And little!  Everyone is so much shorter in person than you think!

Leading up to the weekend, Jeff and I had planned to go to Soul Cycle on Saturday morning with friends. The first time I’d gone, I was a little mehhh on it. The class itself was really good, but I’d gone in Georgetown, and it was a very homogeneous crowd, which made me really uncomfortable, almost as if there was some purposeful reason that there were no people of color there.  This time, I went to the Mt. Vernon location, technically Chinatown, and it was FULL of people of color.  We actually went to a Beyonce vs. Rihanna class on Sunday, and it was probably about half black people, Asians, and Indians.  It was so, SO cool to be in a place where black women are working out, and I was right in the thick of it!

By the way, check out the way that Soul tricks you into leaving your phone in your locker.

We need this at the Y. There was a woman sipping a coffee and checking her phone the entire class again this morning until I really turned the heat up. The rest of the class can thank that woman for how much I beat up on them today.

Saturday evening, I met up with Scott (who’s been mentioned a few times here), and he took me to the coolest little party, a bourbon tasting party.  I sipped on water with the other pregnant girl, and we actually had a blast.  And Sunday, we met up with even more friends for brunch at some amazing bread and cheese place.  DC has zero shortage of good places to eat.

Sunday evening, after another Soul class (the Beyonce vs Rihanna class), my check engine light came on, despite the fact I had just taken the car in for maintenance on Tuesday.  After a few calls to my poor husband (who probably was panicking with his pregnant wife wandering around the city with a broken car), we decided to get the car towed to the dealership in Alexandria. 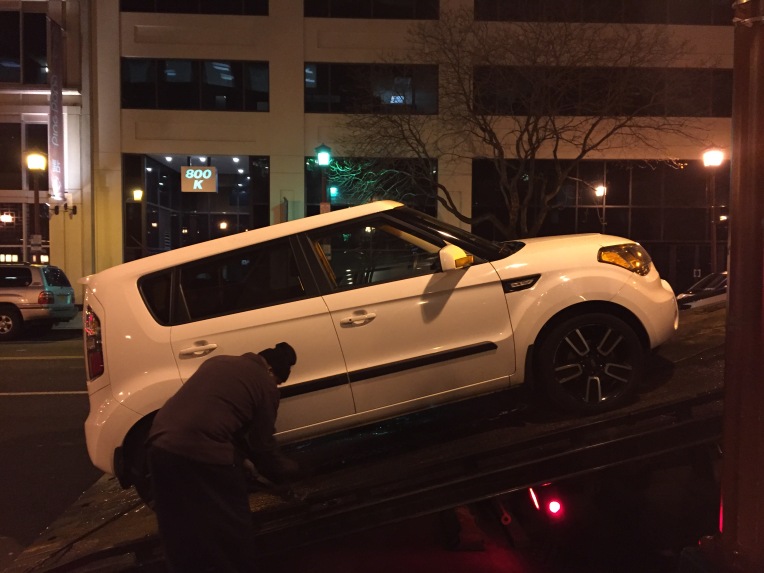 The tow truck driver was really kind, and I rode down with him to the dealership, and then caught an Uber to a nearby hotel. Long long story short, the car had some sort of valve issues that made it not super drive-able, and on Monday, instead of working from work, I worked from Centerline Digital, where I’d met a friend for lunch.

Side note about that – the people from Centerline were ridiculously nice to me, and they had no reason to be.  In addition to my friend, Andrew, multiple people, after hearing what had happened with my car, offered for me to sit in a conference room or an office to work there, instead of finding my way to another coffee shop with all of my bags.  I am so thankful for that.  That’s kinda southern hospitality, right?

So how was your weekend?

5 thoughts on “Weekend in DC”