So on Wednesday, Austin turned the big 2-8, so in celebration, I took Austin on date to the first place we ever went, which was the Rockford downtown.

The Rockford is really cool spot, and was an excellent choice for Austin to take me to because the food is good, fresh, and it has a little bit of a vegetarian lean – I could easily find something on the menu without having to do too much wiggling to figure out something to eat.

So I took him there, and we had the best time.  He brought me flowers.  I hope we never stop “dating.”

This poorly lit, sorta blurry photo is the only documentation I have of the night cause we asked this guy at the bar for a photo, and he snapped a terrible one, and I was too embarrassed by his terrible photography skills to ask him to do another one.  Oh well! 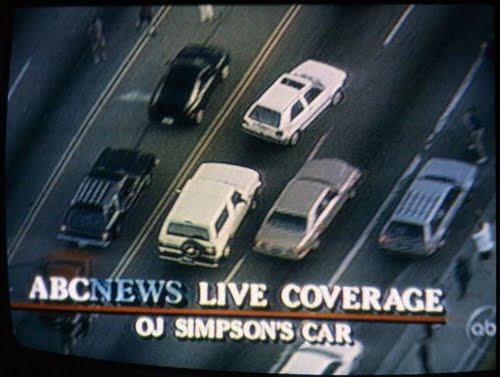 The other night, Austin and I watched this ESPN documentary that documented June 17th, 1994.  Which was 20 years ago, by the way, if you’re looking to feel super old.

I’m not really interested on anyone’s opinion on OJ’s guilt, however, what I am interested in is finding out what you were doing when this chase was going down.

For me, I was with my family (there were only 5 of us at this point), at Smuggler’s Notch in Vermont.  I remember it being one of the most amazing vacations in the entire world – I also remember coming back to the condo from a swim or something, and my parents being transfixed by this chase that was happening in real time.

The Knicks were also losing a game, if I’m not mistaken.

Where were you during this chase?