When you run through any city, you sort of get to know it. Hibernain is an Irish pub that’s part of the permanent landscape of Raleigh. I’ve both run by, and drank there often.  The bartenders are great because they’re literally the only bartenders in the city who won’t give me a hard time about drinking Michelob Ultra on Mystery Beer Night.

The last time I was there was on my 25th birthday, with my run-date, Shawn. We had a blast, and have since talked about going back to relive that evening.

Last Wednesday morning, around 10:30 am, Hibernian burned to the ground in a fire that was suspected to have started in the kitchen. I’ve since re-routed my run by there to be able to pay my respects to the little pub down the street from my home. I was heartbroken to see this. 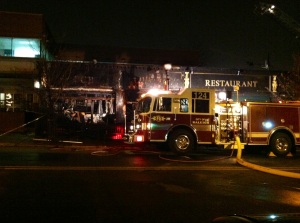 Between the noise and the smell of that night, it felt like going to a wake.  The inside was compltely burnt and everyone who walked past would double back to see what’d happened.

The owner says that they’ll rebuild, and when I ran by today, despite the smell of burnt plastic, there was already a Cary developer who’d hung a fence and signs.  I’ll keep my tradition of running by til they’ve rebuilt.