I hope you’re doing well.  I’m doing much better, recovering from a little bout of strep.  God only knows how I picked it up, but when I mentioned it to a few girls downstairs, they told me they may have picked it up from campers/middle schoolers in the building, and that they had had it in the weeks before.

Strep is not a huge deal.  Kids get it all the time.  But in the course, it became painfully apparent that I’m not 20 anymore and I wouldn’t just bounce back.

After I stayed home from work on Wednesday, which completely killed me inside, I woke up on Thursday feeling markedly better, and I showered and gathered myself together to go into work on Thursday.  I made it through about 2 phone calls, and one short book study meeting before I was completely exhausted, and I went home, prepped some lunch, and alternately slept and worked while I was in bed.  I ended up going for a short walk that night to get some blood flowing, but was shocked at how winded I felt just going up and down stairs.

I used to be invincible.  I broke a bone 10 years ago and bounced back, picking up running in the years after I sustained and recovered from the injury.  I ran a marathon once, threw up during the race, took a short nap, and attended a housewarming later that day.  I once slept for 45 minutes, and was able to work a full day in a bakery later after a full evening of merry-making.  But I think those days are behind me.

I woke up on Friday, mostly recovered from strep, which kicked my ass for 90% of the week, and I was READY TO WORK.  Ready to tackle the world.  Give adversity the middle finger.  I came in around 10, and proceeded to catch up on all the phone calls, emails, and replacement of batteries that had piled up.  Before I could think about getting too tired, I hopped on an elliptical toward the end of the day, and the endorphins were flowing…

And I was even able to hop on the treadmill for a few miles before I stopped and cleaned up.

Today, my body let me know that it’s not down for any funny business just yet.

I woke up early, ate a handful of fruit, and collapsed for a 2-hour nap, following my full night of sleep.

I still have no desire to eat anything.

And sober June hasn’t been hard at all because the thought of drinking anything other than hot things and seltzer makes me retch.

I have never had an issue with aging because I’m 27, and though I feel like certain parts of me have grown for the better, the good parts that are supposed to stay young and fun have stayed.  But this?  This, where I can feel my body not responding to things as quickly and taking things harder?  That’s hard.  I don’t think I like it.

What are your thoughts on aging?  How do you know you’re not 20 anymore?

I took my first sick day from my job with the Y in almost a year yesterday.

I came home yesterday from work early with an extremely sore throat, but still made it out to a cycling class before I realized I was actually sick and also a huge asshole for going to class where I could have gotten someone else sick.

I’m actually really sorry about that, I like to think of myself as a somewhat responsible adult, and I didn’t realize how sick I was.  But after I was done, the right side of my throat was killing, and when I took a peek back there, it just wasn’t good.

I was prescribed some amoxicillin, and started it immediately yesterday, and then I decided to make a batch of super super spicy soup, which I’ll share on here really quick.

Dump the beans into a large pot.  Dump cayenne and spices on top, and add the vegetable broth.  Stir, and bring the soup to a boil.  Add the cornstarch mixture to thicken the soup.  Stir, and add quinoa.  Lower heat and allow the soup mixture to summer for 20 minutes, or until the quinoa has softened and gets sprouty-looking.  Enjoy on it’s own, or with some chips, avocado, or a dollop of sour cream if the soup is too spicy.

So for my sick day, I woke up, and immediately realized all that my fabulous plans for the day, which included a meeting with my supervisor and closing the building, just weren’t going to happen, no matter how badly I wanted them to.  I texted my boss (my throat was too sore to call), and let him know what was going on.  I texted some others to help me get coverage for the building, and made myself a cup of Thera-Flu tea before I took a nap on the couch for a few minutes.  As the day wore on, and I started getting more bored, I started to get really irritated because middle of the day television sucks, and my throat was killing me, and it was looking like I was going to be too sick to even walk, let alone run or cycle.  I chugged seltzer, laid around, and finally, Austin came home a little early, and it was nice to talk to a real person.

So I’m finally starting to feel better now, a full 24 hours from when I started the antibiotics, and I think I’ll be working tomorrow as well.  I’m glad I got the rest, but was horribly grumpy and bored all day.

What do you usually do on a sick day?

As per the obsession I described lately with sandwiches, I had another sandwich for dinner the other night – 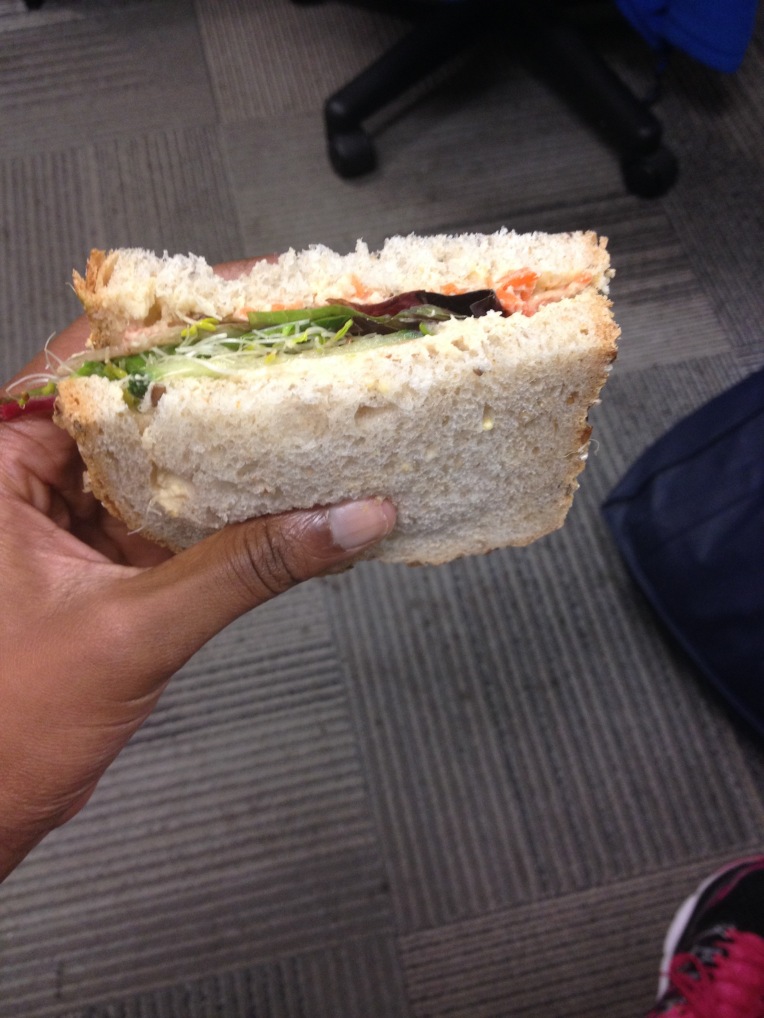 This time, I went full-on vegetarian (I don’t think turkey is a permanent jump into carnivorism for me), and did some hummus, sprouts, and various crunchy things.  This love affair with the idea of a sandwich isn’t just going to stop with the turkey sandwich.  I also made a tofurkery wrap for lunch today.  I’m starting to feel like sandwich girl’s almost-husband.  For whatever reason (and I’m not pregnant folks), the thought of a good, cold sandwich (or a hot one) is making me drool.  Absolutely drool.

But I’m not eating any sandwiches today because….drumroll please…

I’m sort of being a miserable baby about it because I’m not kidding you, I never, never get sick.  I think it’s a combo of all the running (which strengthens your immunity), and being at a germy gym all the time keeps me pretty well.  But I really didn’t feel well when my sister was over this weekend, and even told you guys I was surprised at how badly I was hungover because I didn’t drink that much, but felt heinous all Sunday.  (Don’t worry, I’m still doing a sober June, that’s no excuse.)

So, I woke up with a sore throat on one side yesterday, and rolled over to Austin and groaned.

I pointed at my throat.

“You’re choking?”  I shook my head and pointed at my throat again and gave him a thumbs-down.

He got it.  The one side of my throat was feeling awful.  At first I assumed it was allergies.  And then I decided to take a look back at my throat, and it just wasn’t good.  I scooted out of work, was able to cobble a way to see someone quickly, and get some antibiotics to quickly treat this.  It hurts.  I feel awful.  And I’m trying really hard not to feel sorry for myself.  But there’s definitely a chance that I will be working from my bed tomorrow, rather than from my desk where I can get everyone good and sick.  I’m hoping to at least, at least walk tomorrow.

When was the last time you were sick?

PS, my Mom called to threaten me again this morning.  I hope Protective Services is watching out for me.

Thursday night, my throat seemed…dry.  I ran anyways.   “Aw dammit,” I thought, and I put on some distilled water for my neti pot when I got home.

By Sunday, I had to make an executive decision.  Run, and risk that awful cloggy feeling in my already-sore throat?  Or rent two Redboxes, and park it on the couch with a bottle of Essie’s “Trophy Wife”?

Instances When You Don’t Run/Work Out

Instances When You Do.

The moral of the story is, listen to your body.  If you’re sick, and your body is begging for some sleep, go to sleep.  Neti.  Take a hot shower.  And revisit the issue again the next day.  If you’re kinda not sick and you just don’t feel like it, maybe you need a break anyways.  If you’re just being lazy (and I do it too,) make yourself do something short, sweet, but something that still gets your heart pumping a little.  You might find yourself still plugging away, an hour later, and you may feel better about life in general after a nice sweat sesh.