I thank goodness that I was born in such an amazing time, with such insane technology, that I can exercise pretty comfortably without injury ::knock on wood::.  HRG blogged on this a few days ago, and I just had to follow suit!  So I present to you, 10 fitness things that I Could not Live Without.

I don’t always listen to music, but I think the combo of the safety factor, music, apps, at the occasional Netflix when I’m stuck on the treadmill in the winter is really nice.  During the infamous Greensboro Marathon of ’13, I was able to call Austin (sobbing, mind you) that I was really sick, and that my finish would be later than predicted.  I thank God for that and that I didn’t have to worry him for hours.

Now of course, as soon as I started writing about this, my Garmin started acting really strangely, and at one point I thought it had completely died, but I used it yesterday, and I think it’s going to be okay for the next little bit here.  It needs to be okay because we just bought a house and that means you have to be really really smart with money for a second while you pay for this little thing that crops up, and that little thing that crops up.

3.  Not technically a fitness thing, but pedicures.  So, over the past few months, I’ve definitely dialed back on the pedis for money’s sake, but I went on Monday night to get a mani/pedi, and I forgot how good they are for the feet, and for the soul/sole.  Seriously, I forget that between teaching a LOT of classes a week, and trying to stay up with my running, your feet can use the help of a professional.  And that’s just what I did, especially since we were going to be taking our engagement photos.  It was awesome.

4.  Hydration things.  More specifically, the hydration backpack.  Yes, it looks really silly, and it kinda smells now that it’s been through some times with me, but I would never ever have survived a single North Carolina summer without it.  It’s convenient, it has a LOT of hiding places, and it frees up your hands to do things OTHER THAN grasping a water bottle.

5.  Good running shoes.  Thank God for the opportunity and the education I’ve been given on running shoes, because I think a good pair of running shoes can mean the difference between loving to run, and hating it because everything hurts and feels terrible while you run.  No, running shoes will not inherently make running amazing, but it makes the ride a little more enjoyable.

6.  The foam roller.  I think that there are some folks who still don’t really know what this thing is.  It is the most incredible little piece of equipment.  It’s cheap, and the best thing to do for sore muscles, pressure points, knots, or anything that comes up when you’re really feeling horrid.  And if you’re training for anything right now, you know that will happen.

7.  The treadmill.  Okay, okay, okay, hear me out okay?  Most of us runners refer to the treadmill as the “dreadmill” because of how boring it can be.  But it can be really really useful, especially when it’s really really hot, and really really cold.  (Anyone flashing back to the Polar Vortex of early ’14?)  There would have been no way, a few of those days, that I could have gotten a run in, and I would have gone crazy.  Especially the day when poor Austie was stuck on the road for like 6 hours trying to get home during the snow.  I needed an outlet for sure.

9.  Nuun, and other forms of electrolyte replacement that have  been invented that don’t contain corn syrup and Red 40.  This stuff is great to replace some of the stuff you sweat out, but also kind of great in real life.  You drank too much?  Nuun.  You have the flu and you can’t really eat anything?  Nuun.  You want to spice your water up and make it a little tastier and interesting?  NUUUN.

10.  Rundies.  Runderwear.  Banish them pantylines and they’re wicking.  You don’t have to go commando in your tights any longer folks.  Rundies are the way to go.  They’re expensive – but SO worth it.  I actually have started wearing them with regular things because of the lack of pantylines that is involved with them.  What a wonderful, wonderful invention. 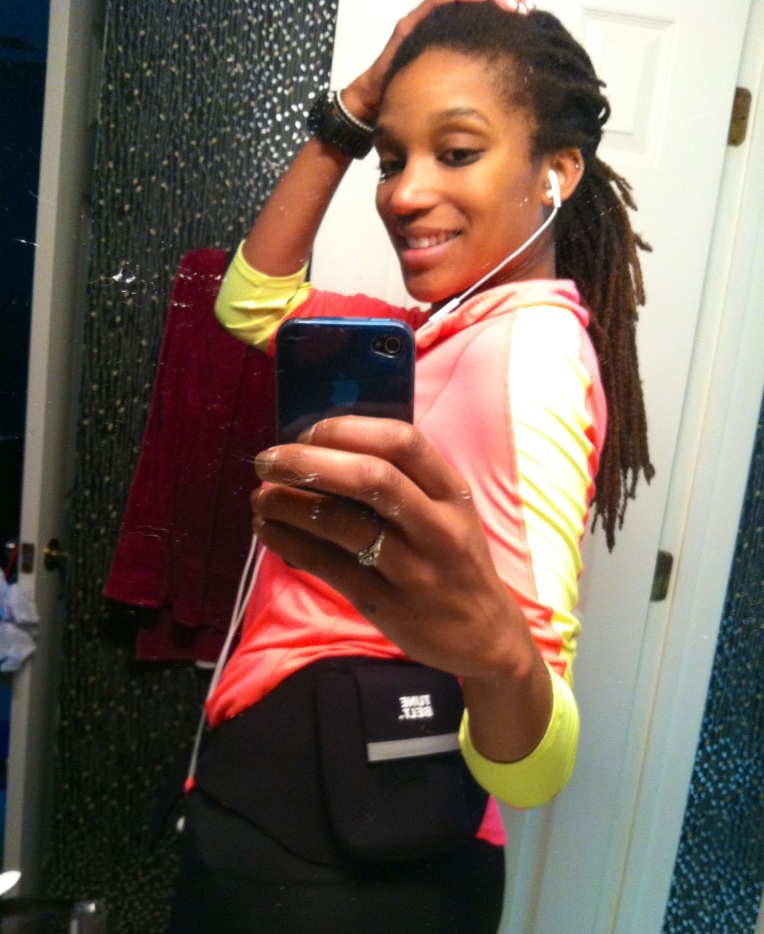 First and foremost, everyone wave to my mother ::waves:: who is an avid reader! Hello mother!

Plain and simple, I am a genius. I don’t know why I’m sitting here in Raleigh, and not at my MENSA meetings, but it is what it is. Consider yourselves lucky to be in my midst.

So I had to quickly run before work. (Side note, one of my New Years Resolutions should have been to stop dawdling – I can waste time looking up Wikipedia facts like a PRO). And I wanted to take my iPhone with me so I could listen to Katy Perry Pandora. Duh.

Well my phone doesn’t necessarily fit in my iTouch arm band, and it bounces around in my hydration belt so what to do? I put in my Tune Belt that I wear for the mic when I teach Zumba, and I’ll be darned if that was not the best invention idea I have ever had! Didn’t bounce, didn’t make my waist all sweaty, and I was able to enjoy Katy and friends for like an hour! Boom.