Total weight gain:  I have not stepped on the scale in actual ages.  I’m in the 20 range I know, and I’m continuing to exercise, teach, and not eat everything in sight.  Which really isn’t super hard because my stomach feels like its been squished into something the size of a grape.  If I even think about overeating, I get refluxy and really uncomfortable.

Sleep:  I do it. Interrupted, always, by an early-morning bathroom break.  Yesterday’s break, and I was up, watching TV with the cats until it was time for regular people to wake up.

Best moment this week:  Step class with Jana!  I sort of tricked myself into going – about 20 minutes before 10am on Saturday morning, the strength instructor called with an emergency, and I was up and close enough to come in and teach the class.  Jana’s class was right after, so I stayed, and I was really glad I did.  Great workout, and great (though short lived) energy boost.  One riser, and a few mods, and I was good. 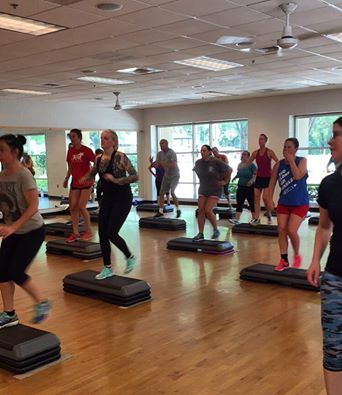 Food cravings:   Sparkling things still.  Pie is still something that interests me, but acquiring pie is a really difficult task, and my main barrier to entry as it relates to dessert.  I really just like pie CRUST.

Food aversions:  Eh.  Food in general.  I am a big big fan of smoothies lately because they’re so easy to get in without having to do much prep or anything.

Symptoms:  Again, I feel big.  And I’m experiencing some pelvic pain, most likely indicative of a fun thing that happens to your pelvis and which sort of spontaneously resolves itself after delivery.  I’m waiting to hear back from the prenatal yoga instructor, and I’m paying a visit to the chiropractor this week for that, and a little SI joint irritation.

Looking forward to:  Visiting baby land again.  Austin and I went to Target and Babies blah blah this weekend, and it was really really fun.  I thought it was going to be kind of overwhelming and lame, but it really wasn’t.  I’ve largely accepted that we have no clue what we’re doing, and nothing will really change that.  Makes things feel soooo much smoother once you can be at peace with that.  We’re going back to nab a few more things next weekend 🙂