Pretty sure that’s what bloggers say when they’re talking about blogging about the Bachelorette, but I’m literally talking about my bachelorette celebrations that I had all weekend in Charlotte.

I made it clear from the beginning of planning this shindig, that I wasn’t really the type of lady to want to go to a Chippendale’s Show.  I really don’t like the idea of a Magic Mike type gentleman rubbing all over me.  It’s not that nudity in itself offends me, but being touched and swung around by a random guy baby oiled up just doesn’t do it for me.

So after this perk of my job… 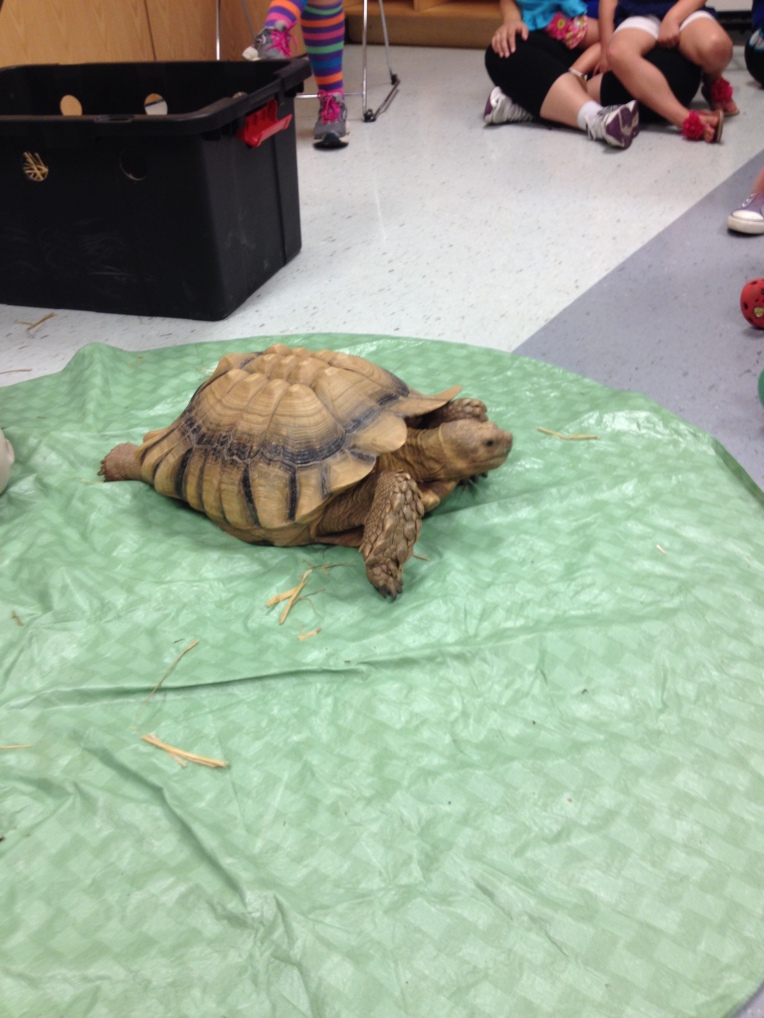 (This reptile lady came to the Y on Friday for the kids, and showed them slithery crawly things).

(I went for a run after work, and sort of stumbled on the campers eating shaved ice and running around in bounce houses).

I trekked down to Charlotte in the pouring rain for my bachlorette, and we started Friday off by going to the Harris Teeter for some food for dinner and Saturday morning’s breakfast.  What was really really neat was that my friend and bridesmaid, Melanie, opened up her family home to us in Charlotte and allowed us to stay there, so we wouldn’t have to spend a million dollars on a hotel and eat out for every meal, which is like my worst nightmare.  Not because it’s super unhealthy, it doesn’t have to be, but because with my gastritis, I really can’t take eating out left and right without being really uncomfortable and ill the next day.

So we cooked dinner, drank some wine, and caught up on friend things on Friday night and planned to get sweaty on Saturday.

Lucky for us North Carolinians, we have the White Water Center available to us, and after waiting for the rain to let up, all of us caravaned over the the Center.  I’ve been once before to actually do some rafting, but this time, we went and spent time on an obstacle course, walking around, eating at the little restaurant they had on campus, and my fave, ziplining!  The second we got there, I almost regretted not rafting, so we started talking about how we will be back to raft.  I’ve never considered myself much of a naturey outdoorsy person, but something about being at a place that let’s you get physical and push yourself will really bring it out of you.

After almost a full day at the center, we headed home to freshen up, and officially got the party started, in the best way that a few 20-somethings with full-times jobs can.  It’s funny – had we been doing this four or five years ago, we would have TURNT UP no question, but the turnt level was pretty mild.  We drank, we danced, and generally just really enjoyed each other’s company.  It just felt good to get all the people I care about (minus some really important ones that couldn’t make it) in the same spot, and getting them to know each other.  It was really cool to see the ease with which these folks were able to get along with each other, and it makes you feel confident in your friendships.

Finally, on Sunday morning, we woke up, grabbed showers, and met with Austin’s mom and my mom for a kinda bridal shower thingie.  It was SO nice, and once again, having all that love in the same place was really trying to make my head explode.

How was your weekend?

3 thoughts on “Blogging the Bach.”