So the big Lake Street Dive post is coming, but not til tomorrow.  Suffice it to say the show was awesome and I got to meet all the band members and tell them how awesome their show was.  !!!  So pumped about it! But here’s a little taste.

Anyhoo, so back to the story at hand.

So a few years ago, I was at a show at this same venue with my friend Alexa, the one who got married last spring.  She is amazing, ps, and has been really helpful with wedding stuff.  Anyhoo, so we went to this show, where Breathe Carolina was the headline.

Well Miley Cyrus’ brother was performing with his new band there, and after they performed I really had to go to the ladies room to powder my nose. 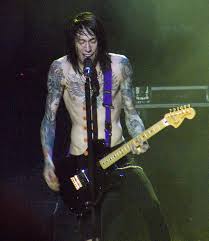 Well Trace was standing by the bathrooms, and covered in tattoos and no shirt, we bumped into one another and kind of blinked for a second.  Me because of all his tats, and him probably because I was very rudely staring.  So finally, he gave me a big hug, and we chatted about his show for a while before I continued to do my bidness, and he went along to do whatever.  And that is the time I met Miley Cyrus’ very scary-looking, very nice brother.

What famous people have you met?

And as a side note, that same night, the cutie from the Ready Set hit me in the face with his water bottle when he threw it.  I think I might have saved it for a while.

4 thoughts on “That time I ran into Miley Cyrus’ brother.”