What a lucky week!  We have not one, but two guest bloggers this week!  Let me start by introducing our topic.  ::sips Crystal Lite:: Ahem.

I’m training for a marathon (number 27 of the list of “Stuff White People Like”).  And I get mostly encouragement from my friends and family, but I get the occasional hate from folks, and a whole heck of a lot from other black women.  Saying I’m crazy, saying I work out too much, and that I’m too thin.  But for doing a seemingly good and healthy thing for myself, I’m getting a lot of discouragement.  So the past few weeks on the road, on the treadmill, and in the studio, I’m looking around, and I seem to be in the minority in these places.  And according to stats on obesity, it looks like I’m right, we (black women) are not doing a whole lot of working out.  So I asked Facebook, I asked Huffington Post, and I asked my pretty friend Theresa what the deal is.  Why are we (black women) in the minority at the gym and in races?  Why is the gym so white?  Why don’t black women work out? 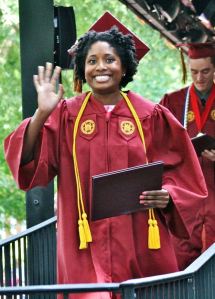 T: “I’m not sure how many times I’ve heard/read that black women don’t work out. Countless times I’m sure.  But I’ve never really understood it because for me personally, and all the black ladies I know, this isn’t necessarily a reality.

I wanted to say my piece:

This whole ‘black women don’t do exercise because of their hair’ is a tired narrative, y’all.  I mean I get it, our hair requires a different kind of maintenance and products than advertised in our society, therefore people think we have the short end of the stick in the appearance and hair department (we don’t, IMO).  I don’t want to go on a hair rant because I’m here to talk about my experience and observation as a black lady who exercises.  I started swimming in the 1st grade and did so competitively until 10th grade.  During this time (3rd grade-10thgrade) I was getting my hair chemically straightened and I would blow dry my hair and straighten it every time I swam.  It’s honestly a wonder I even had a hair on my head with all that chemical damage, but I digress.  After I quit swimming, I took up working out at the gym.  Nothing deterred me because I viewed physical fitness as part of my life and something that everyone in my family was always interested in.

After reading through those reddit posts, it seems that many women are interested in exercising whether it is running, classes, or sports.  The main thread throughout is like I said above, exercising isn’t viewed as a priority.  And until it is, I feel we’ll still be here spinning our wheels and waiting for some different result (that really won’t happen unless there’s some sort of grassroots effort).

My expert opinion? It’s really not all that serious.  People are making all these excuses for black women not exercising like hair and other appearance factors when I personally think it has everything to do with cultural indoctrination that exercising isn’t fun or it’s too hard AND that it would seem that some black women don’t have support systems encouraging health and fitness.  Without someone laying the foundation in the home, how is the idea supposed to diffuse amongst the general population?”

Theresa makes some excellent points.  As a woman who exercises, she doesn’t feel that the hair thing is a good excuse.  I’m honored to have perspective from another woman of color.

Here a few bullets from other ladies that we’ve gleaned from our research.

Long story longer, four out of five African-American women are overweight or obese. In 2010, black women were 70 percent more likely to be obese than their white counterparts, according to the US Department of Health.  That’s bad.  That’s really bad. Obesity influences rates of cancer, Type 2 Diabetes, high blood pressure, heart attack, high cholesterol, and hypertension.  All that to avoid sweating for an hour a day?  Not really worth it.

So here’s the deal.  Just…MOVE.  You don’t have to run a marathon to get the bennies and perks of working out.  Walk!  Dance!  If you like to shovel, shovel your way to fitness, I don’t know.  The point is, get moving so we’re not suffering all for the sake of a good perm.

3 thoughts on “Is working out for White people? (hint:nope)”