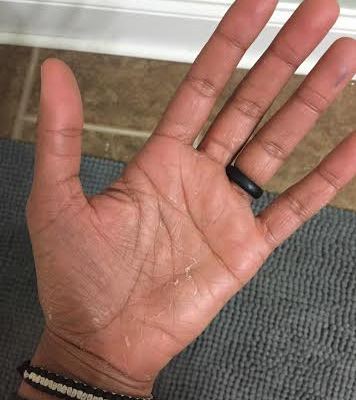 It’s been a really long time since I’ve talked about gross things that can befall you when you go to the gym.  Mainly because that stuff doesn’t faze me as much as it should, and because I want to encourage you guys to work out, not scare you off.

With working out, you are, for the most part doing something awesome for yourself.  But the nature of doing things that involve sweat and being in close quarters with someone else means that sometimes, really gross things happen to you.  You catch a cold, pinkeye, you rub the skin out from under your bra, you start to be able to smell yourself when you wait just a smidge too long after your workout to take a shower…you get it. [Side note: every. single. one. of the above. has happened to me.]

So, a few weeks ago, my palms began to itch.  First off, in Haiti, that’s a good thing.  It means you’re coming into money, which I’m totally fine with.  And one time, my palms starting itching really badly before I got a new job, so I knew something good was going to happen.

Then I figured it was just my acne medication.  After years of battling with problem skin, I’m still using Proactiv even though I’m no longer 16 and it’s sort of expensive.

After a few days of the itchy palms, I looked down, and saw this. 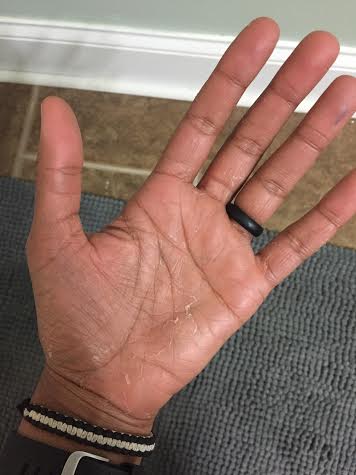 It appeared that my skin was peeling.  And it got much worse than this.  Like way worse. I backed off, tried to apply the Proactiv with my fingertips, and even tried to crowdsource the info.  Which is disgusting and TMI, but I couldn’t get an appointment with Ginger, my dermatologist forEVER.

It wasn’t until one of the trainers wandered into my office a few mornings ago that it started to click. She pointed out that it seemed to stem from an area around my wrists, which meant that it might be related to something I’d touched with both hands.

I’d picked up a fungus from a spin bike.

After I figured that out, it was pretty much an easy fix – I bought a few tubes of lotramin and some spa gloves and it was cleared up within a week. But talk about gross/embarrassing?

What the heck gym? I thought we were cool! And then you betray me?

So in addition to strep-pinkeye-chafing-bacne…you can count Athlete’s Foot not on your feet as one of the perks of your gym membership.

I really don’t want to hear about what you’ve picked up from the gym if I’m being completely honest.  Instead, please share with me what you ate for breakfast this morning!

I think I “ate” a smoothie made with old frozen berries, Trop 50, some Whole Foods protein powder, and a handful of spinach!