I ended up coming home kinda late last night because I have a secret life.

After I watched most of the soccer game (yay US women) with some friends and a fake cocktail, I scooted a little early so that I could jump in the shower (I was all gross after running with a friend earlier) and quickly get ready for a gig I had with an underground rapper in town.  As I was at the show, enjoying some of the artists, and before Mark “Franchise” Jusino performed, I realized how funny it all seemed.  I’m a Director at the Y.  No one in the entire world suspects that I’m out at a venue that serves no food, singing to an audience of rappers and their supporters.  But there I was.  Isn’t life funny?

So along those lines, I ate a Reese’s big cup yesterday (before I taught a class, no less) and I was thinking about those things that I love, that I’m sort of embarrassed to admit, as a somewhat healthy person that I enjoy.  I hope you guys still like me after.

This thing is such treat for me.  I’ve long sung the praises of the Reese’s Big Cup, but I need to reiterate, this treat is FANTASTIC, mainly because of the peanut butter to chocolate ratio.  I love getting one of these from the gas station, saving it til I get home, and eating it when I feel the need for the sugar/salty goodness to hit my lips.

I don’t need to talk about why these are incredible and amazing. I really don’t. They just are.

A cold bubbly something.  A seltzer is the best.  A diet sprite will do.

Cold seltzer. It’s not bad for you per se, but I think it’s sort of abrasive on your teeth. But one of these while you’re just cruising down the street in your white Kia Soul, listening to trashy pop. But I usually have to hide the cup. A BK Lounge Cup is never ever a good look at work.

A pop tart with a cup of coffee. 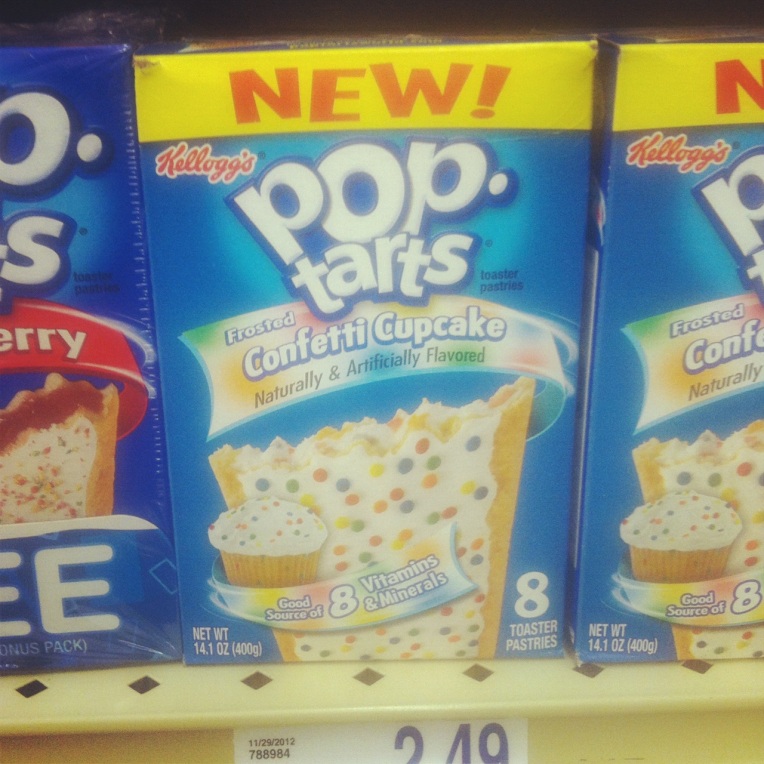 Not this flavor.  That is disgusting.  But the strawberry with a cup of coffee is perfect.  Also 400 calories and an indecent amount of sugar, but, it’s a TREAT.

As a reminder, I totally do enjoy this stuff, but I’m not a total pig.  This is a once-in-a-while thing that I really really enjoy, which is how I mange to maintain a decent level of health.

What are your guilty pleasures?