So my weekend started long, long before Friday at 5pm.

Tuesday evening, I stayed up until 2 am, getting my ducks in a row for work because Wednesday morning, bright and early, we were headed out for our Annual Director’s Retreat at work.  The day kicked off with a scavenger hunt downtown, and then we boarded an activity bus for Lake Gaston in North Carolina.

The home we stayed in was beautiful, and the first thing I did when we got there was hop on a paddleboard, and paddle around the lake, despite the fact that I haven’t really done it before.  But I’ve seen it done a ton in the tabloids, so I picked it up pretty quickly. 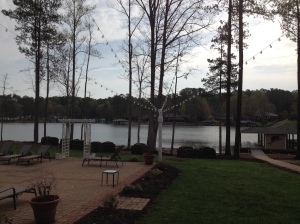 Because I’m still fairly new in this position (I’m only about a year old), I often feel guilty about taking time away from my computer and my email, but it was so nice to spend time sleeping, running, and paddling around the lake, without my phone going off, or without someone walking into my office with a problem that needed to be fixed then and there.

While I was there, relaxing, I continued to worry about my knee and hip.  I was resting (somewhat), taking a ton of Aleve, and hydrating, but some residual knee pain from this bad boy…

…which resulted in a fracture, some crutches, and some physical therapy, started to creep back. After I talked to my friend Google, and then the Physical Therapist, she told me it was most likely that I had a small tear in my right meniscus, and that I needed about two weeks of swimming, cycling, foam rolling, Aleve, and that the tear should take car of itself.

And there went my plans for a marathon.

I was a little disappointed, but relieved that I wasn’t making the pain up in my head.

I was able to pull out some of the braces that Dr. Miller gave me when I was on crutches, healing that fracture, and make use of them for the first time in years. But I made the decision then that I would meet a friend who was running her first full on Sunday, and pace her for a few miles, and that was that!

After working the expo for a few hours on Friday and Saturday, I convinced my hubby to take me to this new place in Raleigh, Pho Pho Pho, since I’d been looking for pho nonstop since I had it from Whole Foods a few years ago, and hadn’t had a great bowl since.  It was AWESOME, and I was served enough to save some for lunch on Sunday after the race!

The night before the race, I was able to sign up for text tracking for my friend Liz, who was running her first full in Raleigh.  When I got the text that she had passed the 13.1 mile marker, I started getting myself together, and walked down the street from my house, which was right between miles 16 and 17.  I spotted her, and we headed out.  My hip felt okay, and knee felt good, so my plan to just run a few miles turned into 5, which turned into 10ish.  Oops!  But I got to see my friend through her first finish line, and she finished her first marathon with an impressive 4:45 time, which was her goal!  And I got to test out my legs before going into a two-week break, which is supposed to fix me up.  Cross your fingers for me!

I had a nutty weekend.  What did you do this weekend!