There’s a saying in Haiti, and it translates loosely to this. “You eat the meat, and spit out the bones.”

Take what you want or need from every situation, and “spit out” what you don’t need. This logic should have applied in the case of Vibrams. Vibram, which is under the umbrella of New Balance (fun fact!) advertised these zero-drop minimalist shoe, and claimed, among other things, that the shoes would alleviate knee pain, blah blah blah.  I need you guys to understand that any shoe that across-the-board, promises to alleviate knee pain, is probably bs because of the sheer fact that shoes are subjective.  Everyone cannot wear every shoe.  Because every body is different. 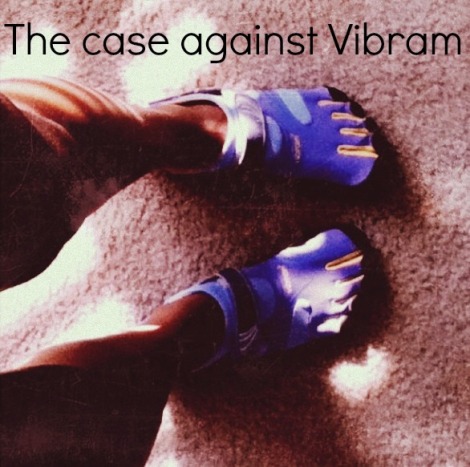 It was fine, until my achilles tendon on my right side started bothering me.  So I stuck to the shoes mainly for things like weightlifting, and left the long runs to shoes with more cushion.  I love cushioning, and minimalist running just wasn’t for me.  Didn’t mean it sucked.  But certainly didn’t mean it ruled either.

So back to my original point, Vibram just lost a class action lawsuit for making claims such as the one I mentioned above, with the knee thing.  Folks were getting the shoes on, running like 8 miles in them their first day, and experiencing some serious issues.  Which is obviously Vibram’s fault.  <-that was sarcasm.

So yes, perhaps claiming that Vibrams would magically cure the common cold was a stretch, but where does consumer common sense rule in making decisions about running shoes?

I cannot tell you how many time folks would walk into the store, state they had just had surgery to fix a ruptured achilles tendon, and then ask to see all minimal shoes, despite our suggestions toward something with a little more structure.

Here’s the lesson you should take from this Vibrams thing.

USE YOUR BRAIN WHEN SHOPPING FOR SHOES.  If you’ve been injured before, it’s really not the time to try some crazy shoe with zero support.  If something hurts, stop it and consider a different shoe.  And for the love of God, investigate all wacky claims for yourself.

Have a ever run “barefoot”?  What did you think?

-I did for a short time, like I said, before my achilles started bothering me, so I stopped.  After that, I ran in the Saucony Kinvara for a while, which seemed to agree with me a little bit more.  Austin actually lifts daily in his Vibrams, but he is relatively injury-free and has no problem with it, but he saves his long runs for a more traditional running shoes.

6 thoughts on “The Vibram thing.”