I ran a marathon.

If you’re thinking about running a marathon, and you’re kind of playing around with the idea, DO IT.  It’s like the best feeling of accomplishment next to graduating with a Masters or an undergraduate degree after a long hard road.  It’s like you work toward it, you work toward it, and OH LOOK! Now it’s here, and you finally get to see your hard work pay off.  It’s really neat.  So a few marathon tips, and a little insight into Shamrock?

You need a hotel?  Get one that’s walkable.  Now’s not the time to be getting yourself a motel in the hood.  Because you’re gonna be feeling some type of way when you finish, only to realize that you paid to park in a sketchy parking lot, and that you’ve got to ride around, smelling like a locker room, to the Sundial Inn, or worse, the Motel 6.  Just spring for the extra.

Bring a friend.  If you can convince someone to do it with you, I think that makes it way better, and the two of you can encourage each other.  You and aforementioned homie don’t need to be pace buds, but even to check into the hotel with, to eat a few meals with, to walk around the expo, and to encourage each other is fun and fine!  I brought Jenny, who was quite a bit faster than I am, but we bounced some good energy between the two of us, and it worked out!

Be prepared for things to go not exactly how you planned them out in your head on race day.  You do everything you’re supposed to.  That doesn’t mean the weather or the course will.  The weather this weekend, quite frankly, sucked a big fat one.  It was beautiful and breezy on Saturday.  On race day?  Overcast, cold, and a few rain drops, though the rain held off until after we scooted.  The course also was a little longer than 26.2 miles, which I’m investigating right now.  Oh well, you can’t do anything about it once you’re in the thick of the race, right?  So just solider on!

Throwaway clothing.  Not kidding.  These cheap articles of clothing are going to save. Your. Life.  Over the top of my adorable little green cap-sleeved tech shirt and compression 3/4 length pantaloons, I threw this horrific hoodie with holes in it over the top, as well as a slouchy pair of sweats.  I was able to, in the pocket of the hoodie, put some hotties, to keep my Raynaud’s-afflicted hands warm while we stood around and waited for the elites and the first corral to get moving.  I had gloves as well, which were thrown away around 20-some-odd miles because I could not get them back on my hands.  Oh well.  RIP Brooks gloves.  You served me well this past winter.  But someone else is enjoying you now. 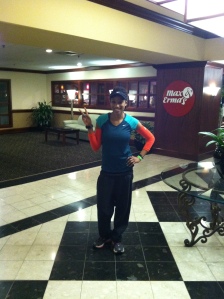 Be sweet to the volunteers, cause they’re gonna be so sweet to you!  I understand why these road races cost so much.  They put a LOT into them to make sure that we’re rolling relatively comfortably for 26+ miles.  The volunteers stood out in the freezing cold for close to 5.5 hours, holding little cups of water, Gatorade, bananas, cookies, and gels to make sure we could cruise successfully.  They clapped, they cheered, and at the end, stood out on the even-colder beach to make sure I was given a finishers medal and a wonderfully warm fleece blanket.  My hands were too cold to open the packaging my blanket came in at the end and a volunteer busted open the package and turned me around to put it on my shoulders.  As a final note, my apologies to the little girl who I spilled water on.  Total accident.

Draw on the strength of your friends, family, and other well-wishers.  You’re gonna need it.  Play their voices in your head.  Think about your mom.  Think about your friends.  Think about the random folks who’ve wished you well.  Think of your ancestors.  Think of how hard you worked, and draw strength.  That will get you through.  I have to give a very special shout-out to all the folks at Fleet Feet, Jenny, Kerry, Vinny, Austin, Alexa, Andrew, Erin, Taylor, Liz, Maggie, Mark, Christopher, Chelsie, my Mom, and Melanie.  An extra special thanks to Jerry, my co-worker, with the southern accent, whose voice kept playing over and over and over in my head.

Be prepared.  You’re gonna see a lot of poop, and a lot of public urination.  I only tell you this so you’re not a total weirdo and staring when you see a guy in an Adidas track suit about face, step only a foot away from you, and whip his stuff out.  Avert your eyes, and keep it moving.

Register!  You’re not gonna understand it until you register.  Do it, and you will be amazed at what your body is capable of doing.

4 thoughts on “I ran a marathon yesterday.”