I watch Morning Express with Robin Meade on HLN each morning as I get ready for work.  HLN is CNN’s sensational sister network, and I think I got attached to it when I was like 20, and I had to get up super early to drive out to my internship that was an hour away when I was still attending Elon.  At any rate, I still watch each morning and was part intrigued, and mostly horrified at the story I heard last week.

The half: So the lovely lady pictured above is Laura Smith.  After training since last fall with both a trainer and a nutritionist, and peeling 47 pounds off of her 6’3″ frame, on Sunday, January 20th, Laura embarked on her first half marathon, the Arizona Rock-n-Roll Half Marathon.  She ran for the American Cancer Society, and was covered in ACS ribbons.  “I actually had to stop by the med tent after the first three miles because I had horrible shin splints.  The doctor took one look at me and said, ‘there’s no way you’re gonna finish if you’re hurting this bad three miles in’.  And I was like, I can’t stop.  You could probably see in the pictures I was covered in ribbons.  And each ribbon had the name of a person who’d died or who’d been affected by cancer.  So I shoved some ice packs in my compression tights.  It took me a little longer than I’d hoped,” she chirped in a cheery voice.  And for a first half, you’d have to admit, she didn’t do too shabby!

The massage:  Laura purchased a Groupon and scheduled a massage at the Natural Healing Center, in Aurora, close to where she lives in Denver, knowing she’d be in dire need following the half.  This is where the story just gets absolutely horrifying.  “We were in the room and I thought she [Dr. Wells] was gonna take me back and say, ‘take off your clothes and lay down, I’ll be right back’.  And we were just standing there and staring at the table.  And I thought, ‘Oh my God, am I gonna be too tall for the table?’ And she [Dr. Wells] just goes ‘I’m sorry you’re too fat and I’m afraid you’re going to break the table’.” (At this point in the interview, I was in absolute disbelief).  Laura went on to say that “Dr.” Wells told her not to worry, that she could call Groupon and get her money back.  And Laura was left to scoop her Groupon up, and leave the facility with no massage.

The press:  So how did this get to HLN?  Laura’d tagged her visit with Wells at the Natural Healing Center on Facebook, and said she was excited to go, still high off her success with her completed half marathon.  When she left (without the massage), she’d also written it up on Facebook.  Some friends saw, and next thing she knew, the center had taken it’s Facebook page down.  And that’s when she said the press came calling. “Fox News got ahold of it.  And if they’d [the massage establishment] called, I may not have spoken.  And now, if they were to call today?  It’s the principle of discrimination.”  Kinda cool to see what the power of social media can do, right?  She got my attention, and I’m not the only one.  She’s been featured on CNN, HLN, ABC, Fox News, and Inside Edition.  And the best part?  The owner of the business claims she never called Smith fat.  She claims she called her “large”.  Cue the side eyes.  “I know what she said,” Laura said matter-of-factly. 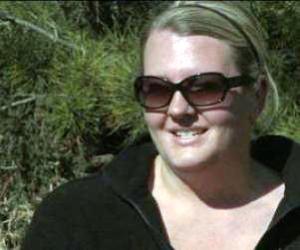 Why is this sort of discrimination still acceptable? So Penny Wells isn’t really returning phone calls, and has deleted the center’s Facebook page, and largely avoided the firestorm that is inevitably brewing.  However, in the brief statement that she did make in response to Laura’s claims, she (in addition to essentially calling Laura a liar), also stated that she was concerned because a 165-pound man had broken a table earlier.  Um.  What the frig is wrong with your massage tables if they can’t hold normal amounts of weight?

That aside, why did the owner feel that it was in any way acceptable to turn away a customer (whose money was just as green as anyone elses’) by making a rude statement about her weight, especially in this case where she essentially discredited all the wonderful work Smith had just done in losing 47 pounds, running a half marathon through some serious shin pain, and signing up for three more halves.  It makes no sense.  And just because the owner was discriminating on the basis of Laura’s weight, doesn’t make it any less offensive than if she’d told her, “I’m sorry, we don’t serve women here.  But if you call groupon, I’m sure they’ll be willing to give your money back!”

So I’d like to take this opportunity to commend Laura for not being silent about what happened to her.  It was discrimination, plain as day, and it wasn’t acceptable.  When I told her how blown away I was at how much weight she’d already lost, she responded, “Well…47lbs doesn’t seem like much when you’re 6’3″.  I still have a long way to go.”  Well, whether that’s true or not, you keep up the good work, doll!  You’re gorgeous, and you’re doing a great thing by responding so openly and positively to everyone who’s reaching out to you!  Laura will be in Raleigh next October, so she and I will be raising a glass to her awesome progress.

2 thoughts on “Too fat for your business?”