This is why we run. 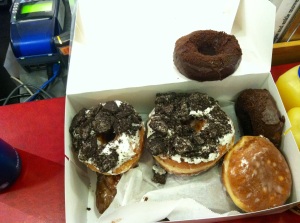 If you think for a second that just cause we run, we don’t like to eat, you are very sadly mistaken.  I’ve been dibblin and dabblin in running for a few years now, and the more I run, the more wicked my sweet tooth gets.  The way I prevent myself from getting as big as a house is that I just can’t keep the good stuff around the house.  However, if someone brings them to work?  You better run.

Mizuno Matt brought us some donuts from Rise (a Bakery in Durham around Southpoint), so instead of eating my lunch, I ate most of an Oreo.  Then I pretended I was only going to eat half of a chocolate by cutting it in half.  I ate the first half, got three steps away, and ate the second half.  Woops.

And sometimes when you run, you find out what you’re doing is just not gonna work whatsoever.  I ran early this morning, where the temps were holding around a balmy and breezy 23 degrees.  ::fans self:: Hawt!  Anyhoo, obviously I was wearing my gloves and the whole shebang, but I think I touched my face a few times because by the end of the 6-miler, my hands were soaked, and I was in some pretty serious pain.  Thankfully, I managed to loop back around to my house, where I spent the next 20 minutes in absolutely agonizing pain.  I ran out after lunch today and hastily procured a new pair of thicker, drier gloves.  That brush with frostbite was more than enough for me to learn my lesson!